All of them have left their mark full of emotion, intimacy, sensuality and loyalty... 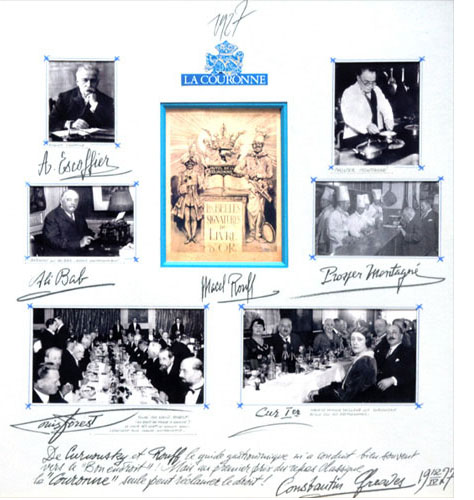 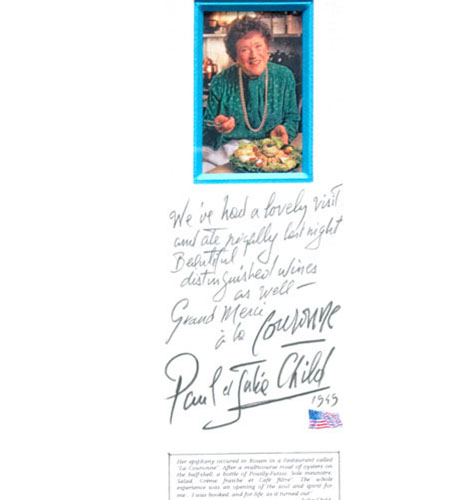 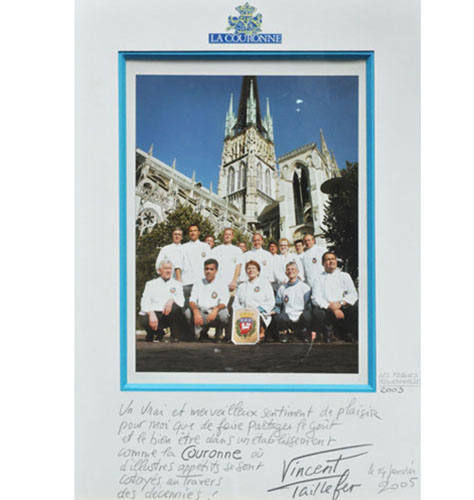 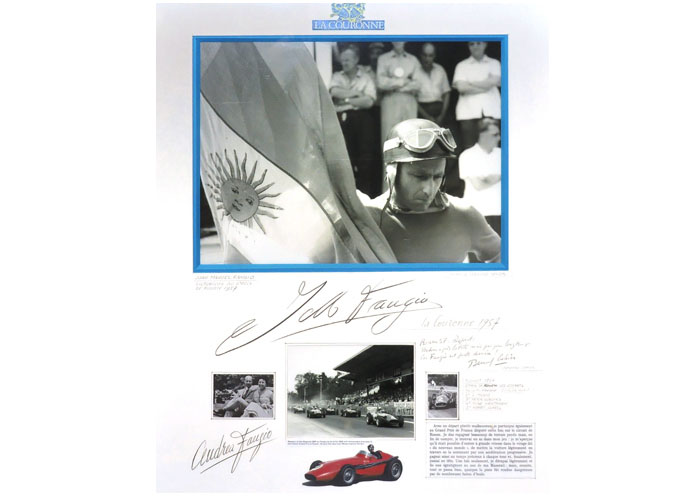 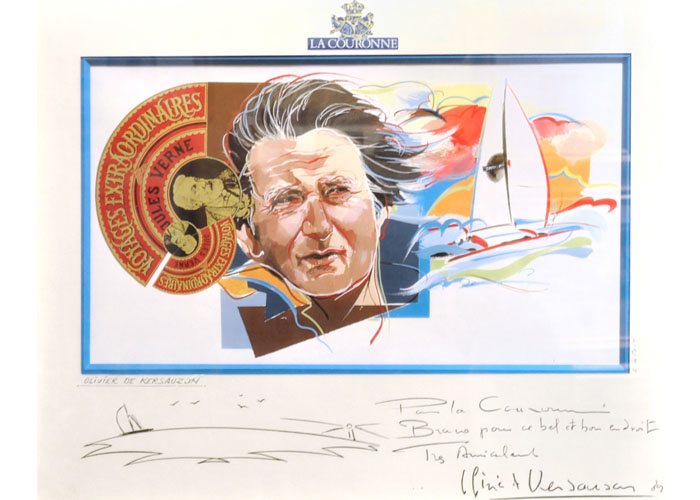 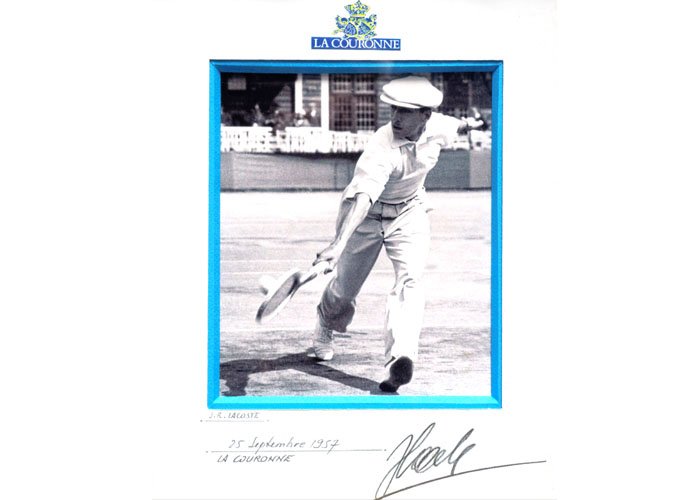 Jacques Anquetil & his friends and challengers, heroes of the Tour de France to whom La Couronne has dedicated the artists' lounge, located in the balconies of La Couronne.

At the beginning of the 1950s, Jacques Anquetil, (from the Rouen region: he was born in Mont-Saint-Aignan), won 16 amateur races, including the Maurice Latour prize on May 3, 1951 in Rouen. A first victory that heralds many others, 184 to be exact.

In 1957, he started his first Tour de France. Five times, he'll win it. An achievement at the time. But he didn't stop there, as he was also the first to win the three major rounds: France, Italy and Spain.

But already in 1954, he had just had lunch at La Couronne with his friend Bernard Gauthier. While the first won the Grand Prix des Nations, the second one did it again on the Bordeaux-Paris, earning him the famous nickname "Monsieur Bordeaux-Paris". That same year, his friends and challengers Louison Bobet, André Mahé, Ferdy Kubler came to dinner at La Couronne on July 7 (3rd stage Lille Rouen) during the 41st Tour de France. Louison Bobet won, followed in 2nd by Kubler. Louison Bobet, other heroes of the sport, held the record for the victories of the Tour de France before Jacques Anquetil: three times he was the winner. In 1997, René Privat and Jean René Godart, sports columnist who presented the program Les Marches du tour, followed in the footsteps of these champions and came to enjoy a meal in La Couronne. Miguel Indurain, who won the round 5 times in a row (1991-1995), also came to dinner at La Couronne in 1997, when he gave up the competition. La Couronne also saw Roger Walkowiak (winner of the Tour de France in 1956), Pedro Del Gado (winner of the Tour de France in 1988) and Raymond Poulidor (1966-2000) whose memories of his most beautiful victories remain associated with the city of Rouen.

Musketeers René Lacoste, Henri Cochet, Jean Borotra and Jacques Brugnon dit Toto, who won the Davis Cup for the first time for France in 1924. Suzanne Lenglen and Cochet came to the Crown in 1931.

Dieudonné Costes, hero of modern times, first pilot to fly from Paris to New York non-stop in 1930, came in 1932 Car racing with Jean manuel Fangio in 1957 And today we are happy to regularly welcome a great champion, David Douillet. but also the greatest captains of ships during the successive Armadas that sailed on our shores of the Seine The geniuses of modern times Henry Ford, the famous car builder who revolutionized the industry, Karpov, chess strategist, but also Cornélus Vanderbilt, the man who invented the chips but especially the richest of the United States thanks to his railway lines, Michel Edouard Leclerc. 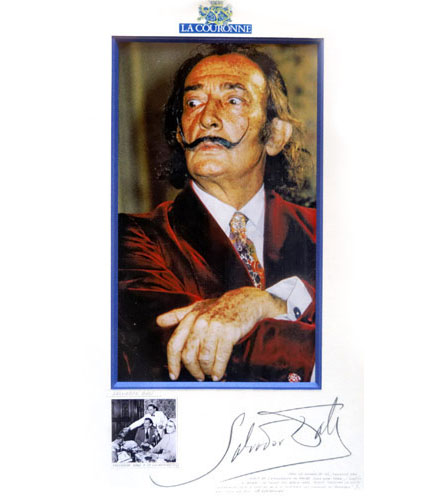 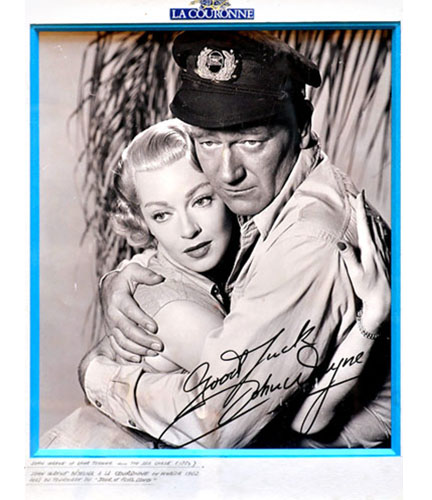 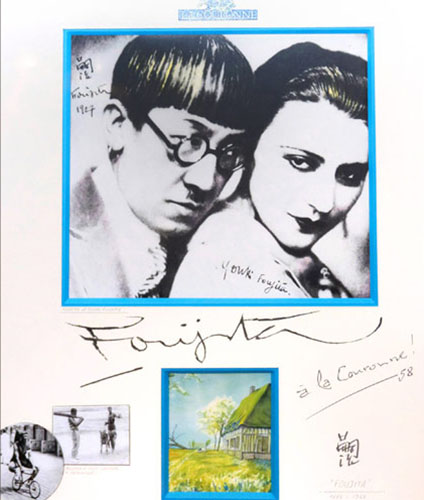 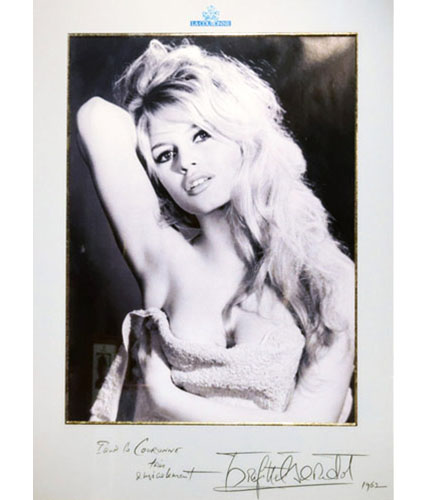 Dali : When he was leaving for America and going to Le Havre to board the great transatlantic ships (no way for him to take the plane), Salvador Dali stopped in Rouen to have lunch at La Couronne, most often tasting a Rouen-style duck.

John Wayne : On the set of the Longest Day in Caen, John Wayne came twice to taste the dishes served at the table of La Couronne.

Gainsbourg, served by Dominique Boucourt and who already loved the taste of provocation... & the most daring, Josephine Baker & Mistinguett

The most beautiful women.... Brigitte Bardot, the icon of the 1960s, Sophia Lauren in representation at the Omnia, Audrey Hepburn, accompanied by these couturiers Courrège and Givenchy, Grace of Monaco, who described the place as magical, she was then president of the Monegasque Red Cross visiting our factories on the quays of Seine, Romy Schneider for whom "The Crown is a celebration", or Ingrid Bergman performing Joan of Arc 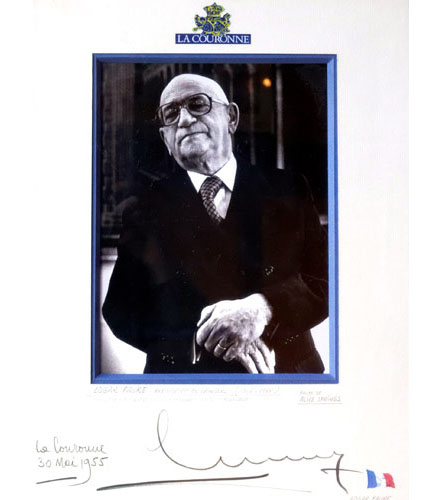 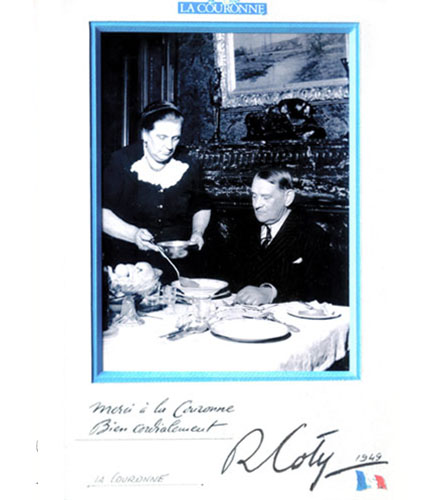 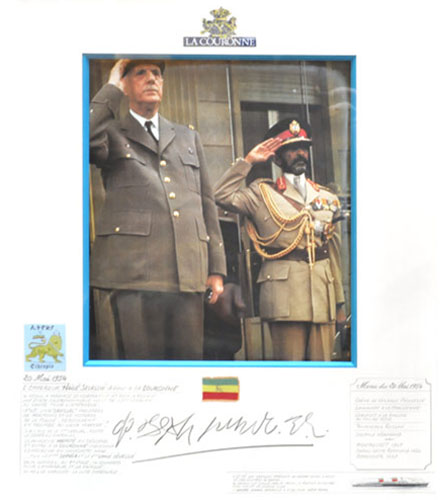 From Gaston Doumergue, President of the Republic in 1928, René Coty, Edgar Faure, President of the Council in 1955 or Georges Pompidou in 1969 to Jacques and Bernadette Chirac in 1976 and 2006, via Robert Hue, Laurent Fabius, Michel Rocard, François Bayrou, Edouard Balladur, Pierre Albertini, Antoine Ruffenach, Patrick Herr and many others, they came to La Couronne.